Iliotibial band Syndrome- Is it really a friction syndrome


Iliotibial band Syndrome- Is it really a friction syndrome?

Iliotibial Band (ITB) syndrome is a common injury in runners resulting in lateral knee pain. Incidence of ITB syndrome can be as high as 22.2% in runners and 15% in cyclists.This pathology is also seen in weightlifters, soccer players and skiers.

Anatomically, ITB is a tight fascial structure which continues from tensor fascia lata and Gluteal maximus insertion proximally and runs along the lateral aspect of the thigh. Distally, it has multiple attachment sites such as lateral epicondyle, Gerdy tubercle, biceps femoris tendon, Vastus lateralis and the extensor mechanism. Underlying the fascia is a layer of adipose tissue which has pain sensitive Pacinian corpuscles.

Typically, the athlete feels pain on the lateral knee and distal thigh about 2 cm proximal to the knee joint. The pain is aggravated by long training sessions, downhill running, cambered courses and attempts of increasing the stride length. Mostly the pain decreases on stopping the activity and occasionally clicking sound can be heard with the pain during the activity.

The common risk factors causing ITB syndrome include ITB tightness, increased running loads in the form of running mileage, repetitive knee flexion and extension activities, weakness in muscles around knee as knee extensors or hip especially the flexors and the abductors of the hip joint.

Fairclough et. al. however challenged this concept of ITB friction. They not only suggested that there is rarely a bursa underlying ITB but also highlighted that ITB is not an isolated structure, but in fact, is the thickened part of fascia lata of the thigh which is connected to the linea aspera of the femur bone by an intermuscular septum and to the supracondylar region of the thigh bone by tight fibrous bands to prevent any movement of the ITB over the lateral femoral condyle. There is recent interest in a fibre complex of Kaplan fibres in relation to ITB and ACL injury.

The most commonly used test is Ober’s test (Fig 1) which was described by Gose and Schweizer. Modification of this test (with the knee on the testing side is kept straight) has also been described. 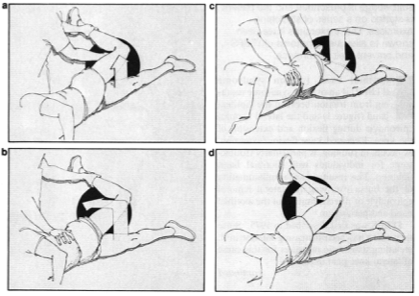 Fig. 1: In Ober's test the patient lies on his side with the thigh of the unaffected leg next to the table and flexed enough to obliterate any lumbar lordosis. The affected knee is flexed to a right angle and the leg grasped tightly with one hand while the pelvis is stabilized with the other. The hip is abducted widely (a) and extended so the thigh is in line with the body to catch the iliotibial band on the greater trochanter (b). The leg is brought to the table in adduction (c). If any iliotibial band shortening is present. the hip will remain passively abducted in direct proportion to the amount of shortening (d) (Modified from (16))

This involves testing for strength of Quadriceps, Muscles around the hip girdle. ITB syndrome is seen to be associated with weakness in strength of gluteus maximus and hip abductors, tightness of tensor fascia lata, weakness and tightness in Quadriceps along with increased lateral tracking of the patella.

The aim of these tests is to reproduce the pain related to ITB. The tests described to elicit this pain response are the Noble’s test and the Creak test.

The patient is examined in a supine position. The knee is flexed to 90o and the examiner presses his/her hand over the lateral femoral condyle and instructs the patient to extend the knee. As the patient extends the knee to 30o the ITB translates under the examiner’s finger. Pain at this point suggest positive test for ITB syndrome.

The patient is instructed to transfer his weight to the fully extended injured leg in a standing position. He is then instructed to slowly squat (one legged) to 60-90o flexion and then rise back up. Positive test for ITB syndrome is suggested by lateral knee pain along with palpation crepitus or snapping.

Investigations such as MRI scan can help differentiate between these diagnoses if in doubt, especially for the intra-articular pathologies. MRI findings in ITB syndrome vary from a normal appearing ITB to a thickened ITB and having bursal inflammation to fluid collection underneath the ITB.

Nonoperative treatment is considered as the first line therapy for ITB syndrome. A variety of treatment methods including modified activities and controlling the other extrinsic factors, Pain medications in the acute phase; ITB stretching and soft tissue mobilisations in the subacute phase; followed by strengthening of weak muscles in the whole kinetic chain. Specific to runners, use of orthotics to address limb length discrepancy; adding lateral wedges to decrease ITB strain; avoiding cross-training activities which involve repetitive knee flexion; and extension exercises such as swimming, hill running, track running have been suggested. Similarly, the cyclists can avoid ITB impingement by making modifications to the bike set-up in the form of lowering the saddle height, upright handlebars, progressing forward the seat position and adjusting the cleat positions.

In cases not responding to these standard first-line treatments, cortisone injections have been used followed by surgical intervention in failed cases. 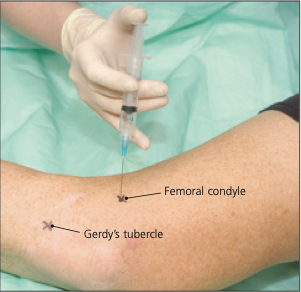 ITB syndrome is a common overuse injury seen in the athletic population especially runners and cyclists. Identification and addressing the biomechanical factors, both proximal and distal to the knee, soft tissue tightness and muscle strength related factors along with correction of the extrinsic training loads form the first-line treatment. Surgical interventions are usually reserved for the resistant cases.

we welcome the chance to serve you.